Sentiment on Wall Street has taken a turn for the worse of late. Overall the bulls are still in control of the charts. However, the bears have recently made progress. The good news that it’s more to do with sentiment than actual fundamental deterioration in the macroeconomic conditions. This is my long way of saying that some struggling tickers like Sundial Growers (NASDAQ:SNDL) stock may be short term bargains.

The S&P 500 has fallen two weeks straight and starting off badly this morning. Meanwhile the small-cap’s Russell 2000 fared a bit better last week.

Over all, the indices are still close to all time highs. The upcoming Fed event could have put investors on edge about the potential taper announcement.

Catching falling knives like SNDL stock is dangerous. But doing so after a harsh correction, and when markets are nervous, lessens the odds of mistakes.

By now, most of the easy forth has fallen off the stock already. From here it will be harder for the bears to inflict more damage.

These conditions don’t guarantee results, they simply improve the odds of success. Investors committed “chasing” errors if they bought into the frenzy in early June, late March or February of this year. Now, that risk doesn’t exist in SNDL, and the market in general has abated a bit. 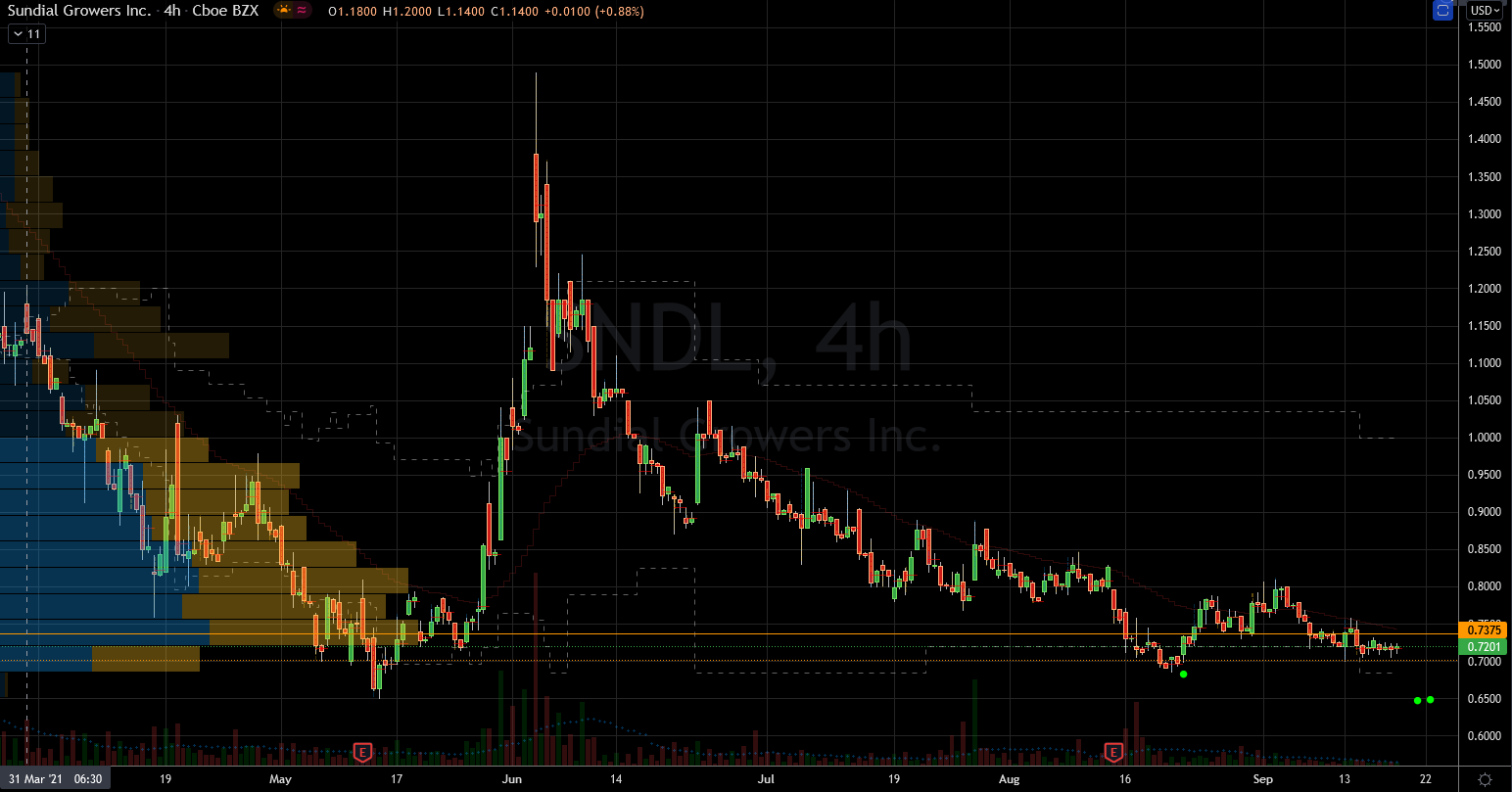 A stock with a tiny face value seems harmless. In reality, the low ticket price doesn’t make it less dangerous. Investors can still lose 100% of their money. SNDL is exciting to trade because of those massive 100% and 700% spikes earlier this year. That’s not a typical reason to chase a stock, and it isn’t mine today.

I give a lot of kudos to cannabis companies that have made it so far. This is against many odds. Not the least of them is that they traffic with illegal substances. Some states have made it easier but the White House needs to follow suit.

Until then, the fundamental metrics are not a reliable gauge to management successes.

Add to this that the business is still budding, then investors must resort to the charts for guidance. This month, SNDL stock slid 10% in a series of lower highs. Luckily, it has so far held a floor near 70 cents per share. The bulls can bounce off this base and recover what they’ve lost. There will be resistances at 75 cents and 79 cents per share.

If, for whatever reason, the SNDL stock price falls below 65 cents, all bets are off on this bounce. Sundial buyers would then have to regroup from lower levels. In January, the stock soared 700% from a base of 50 cents per share. Therefore, it should offer strong secondary support. It would also serve as a logical buy-the-dip opportunity for active traders.

So far, we haven’t discussed the long-term investors. The thesis there is easy because if they believe in it long term, they should just hold it. Time is the only ingredient that they need as their thesis develops. Not all company fundamentals live in the P&L.

Sometimes it is just as important to study the company’s operational progress. Such is the case with smaller young companies like this one. If cannabis is a viable business, then it’s likely that SNDL stock will also climb later. They are early enough movers that they should have an advantage over those who start after the coast is clear.

Critics caution against this team’s strategic decisions. Although they like the high-cash levels, they believe it’s not for special purpose. Hoarding cash and not knowing what to do with it is a serious flaw. Onus is on management to silence them with clear forward direction. They can start by showing progress on their sales growth strategy shifts and soon.

On the date of publication, Nicolas Chahine did not have (either directly or indirectly) any positions in the securities mentioned in this article. The opinions expressed in this article are those of the writer, subject to the InvestorPlace.com Publishing Guidelines.

Nicolas Chahine is the managing director of SellSpreads.com.

On Penny Stocks and Low-Volume Stocks: With only the rarest exceptions, InvestorPlace does not publish commentary about companies that have a market cap of less than $100 million or trade less than 100,000 shares each day. That’s because these “penny stocks” are frequently the playground for scam artists and market manipulators. If we ever do publish commentary on a low-volume stock that may be affected by our commentary, we demand that InvestorPlace.com’s writers disclose this fact and warn readers of the risks.

Read More: Penny Stocks — How to Profit Without Getting Scammed